Creating The Photograph: Snow Monkey In A Hot Spring 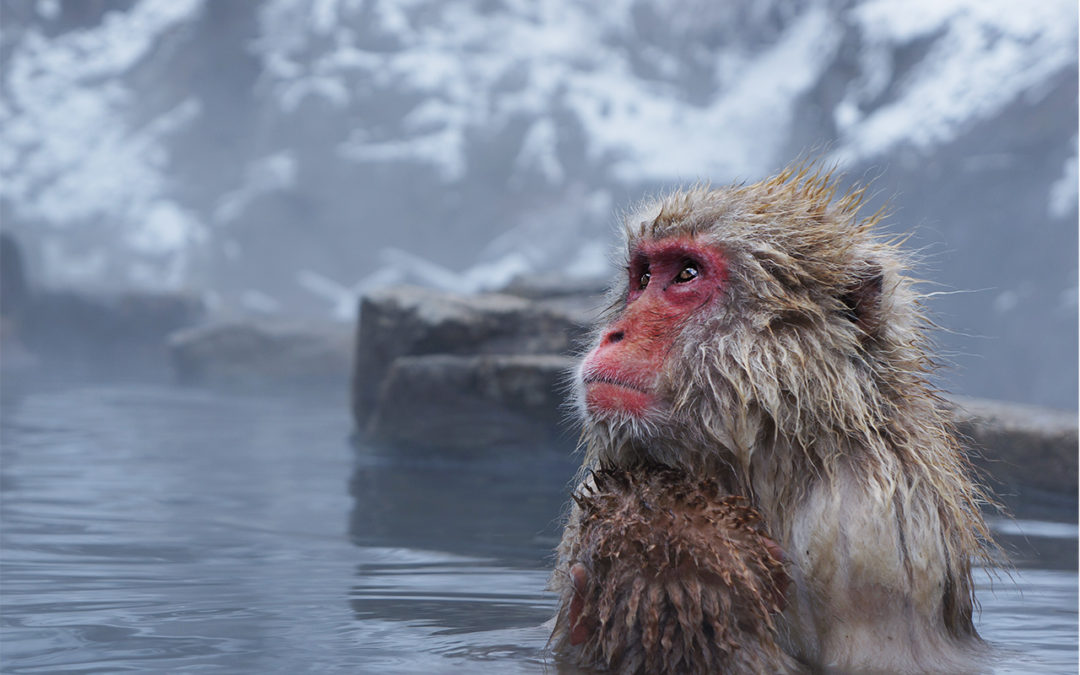 In April I got the chance to spend two weeks travelling around Japan and one of the top things on my to-do list was to visit the famous ‘monkey onsen’.

This place in Nagano is where you can see snow monkeys (more properly known as the Japanese macaque) relaxing in the outdoor hot spring and monkeying around.

I only need two words to describe it to you:

Not only were the monkeys interesting and fun to photograph, but the Yokoyu River valley where the park is located was beautiful too.

Let’s take a look at one of my favourtie photos from the day and walk through how I edited it, step by step.

Check out the before and after photo:

OK, so before we get into the technical stuff, if you’d like to see me actually shooting the image at the hot spring then be sure to watch the vlog below. It’s not essential to this guide but it does offer a behind the scenes look at the monkeys and me in action.

Choosing the image was very easy this time around – there was just something I liked about it and I really wanted to see if I could quickly bring it to life.

Usually I would import the images into Lightroom but I was curious and really wanted to edit it quickly – I have a habit of spending a lot of time editing and tweaking stuff – so I selected the image directly from the folder.

Although there were several similar photos this one stood out to me:

Here are my thoughts:

Here’s the original image, how it looked straight from the camera:

Whenever I want to quickly edit a photo I always turn to my suite of apps from Totally Rad!. They have revolutionised how I work and instead of spending hours or even days agonising over edits I can now get the results I want in minutes.

Now, don’t get me wrong, I still love to edit my photos in Lightroom and doing all the digital darkroom stuff such as dodging and burning, but I also love getting great results fast. It mainly depends on the image: if I know it needs work then I’ll edit it in Lightroom or Photoshop but if it just needs the ‘wow’ teased out of it then I’ll go with the Totally Rad! tools.

I open up the image in Photoshop and just do some simple cropping, nothing too crazy. The main focus here is to get the photograph to feel well balanced.

In the original image above you can see that there are some more monkeys in the background and our subject is too far to the right.

Let’s crop out those cheeky monkeys and bring the attention back to where it should be.

If you’re a rule of thirds kind of person here is the cropped image with a grid overlaid:

I really love the emotion in this photo and I knew that with a little bit of TLC it could be a really interesting image. The next step was to get some separation and help the brights be bright and the darks be dark.

Using Photoshop’s ‘Levels’ tool I adjusted the histogram until I was happy with the effect.

Now we get into the fun stuff!

Pro Retouch V2.0 by Totally Rad! is an awesome suite of Photoshop actions that make editing not only incredibly quick, but also incredibly easy.

Although Pro Retouch is actually meant for retouching humans I figured it would work just as well on our furry friend too.

In the Actions panel I click on the eye makeover action and a handy popup tells me everything I need to do.

I messily brush over the eyes (most of the Pro Retouch actions can be used carelessly as they somehow manage to only target the areas they are supposed to) and in less than 20 seconds the eyes are brighter, cleaner and look more alive.

The eye makeover tool did a great job making the eyes look more alive but I really want them to stand out. All of the emotion in this photo is in the eyes so they need to captivating and they need to pop.

This is done the same way as the eye makeover:

Run the ‘Eye Pop’ action and then simply paint over the eyes.

Now the eyes are really starting to stand out, which is just what we want.

The eyes are pretty much done by this point but I just wanted to give them just one more tiny boost so I went ahead and lightened the iris.

I won’t include screenshots of the action panel or dialogue popups from here on out because they essentially act all the same: click and run the Pro Retouch action you want, brush over the area you want to retouch and you’re done.

Here is the photo after the iris had been lightened:

OK, so we are coming up to the home stretch. The eyes are done and all that’s left is to add some definition and adjust the mood/colour.

So let’s add some definition.

This time I use the ‘Pop It!’ Pro Retouch action and brushed over the areas I wanted to be sharp and have a bit more depth. The main areas of focus are the hair around the face, head and the facial features.

Step 7 – Cool As A Cucumber

So now the photo draws attention to places I want it to and, aside from some cropping and minor adjustments, it pretty much represents what the camera saw when it was shot.

But that’s not how I remember it.

I remember that it was freezing up there, everything was covered in snow and there was a lovely contrast between the rosy cheeks of the monkeys and the white/blue light bouncing off the snow covered rocks.

I want this photo to remind me of that and I want others to see it through my eyes.

For this I like to use my other secret weapon (and all-round awesome time saver): RadLab by Totally Rad!.

If you’re not familiar with RadLab all you really need to know is that it’s a plugin for Photoshop/Lightroom that adds a whole bunch of smart filters to your toolkit. It’s just as easy to use as Pro Retouch and just as awesome!

In Photoshop I open up the RadLab plugin using the funky floating button.

The RadLab window opens and gives me a clean work area for me to make edits. The area is split into three main sections:

There are a whole bunch of filters in RadLab but the one’s I always go for are ‘Lights On’ (for brightening) and ‘Oh Snap!’ (for adding punchiness).

One of the cool things that I like about RadLab is the live previews of all the filters which update in real time. It’s a huge timesaver and means that I can actually see what each filter will look like on my image before I apply it.

Before I apply those filters though I need to bring the temperature down to make it feel more like it did when I was there that day.

‘Cool As A Cucumber’ to the rescue!

With one click the Cool As A Cucumber filter was applied and with two more clicks I added Oh Snap! and Lights On.

I love it when editing is this easy.

And that’s it. Here’s the final image before being sent off to social networks and optimised:

All in all the editing process took me about an hour – I couldn’t help but try out different variations. If I had just stuck to this edit it would have taken about 15 minutes from start to finish which, considering the groggy looking image that we started with, is pretty awesome.

Here’s a quick recap of the apps I used for this edit:

Got a question about this photo, how I edited it or about the apps I used? Let me know in the comments below.