Wat Saket: The Temple of the Golden Mount in Bangkok 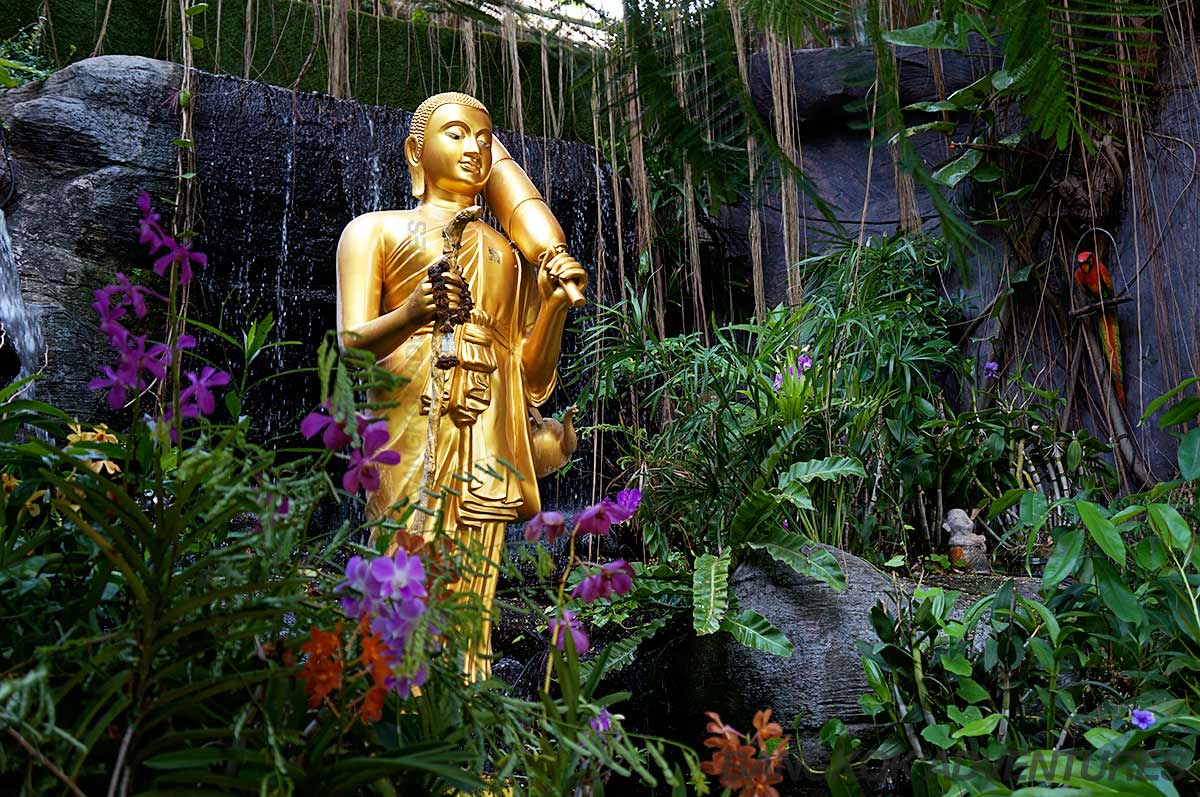 While Wat Saket, also known as the Temple of the Golden Mount, lacks the fame and glory of sites like Wat Arun and the Royal Palace, we would argue that the trip is just as worthwhile. Get away from streams of tourists and touts to this quiet corner of Bangkok’s Old Town, where Wat Saket sits majestically at the top of the huge man-made hill, almost like a castle from a fairy tale. 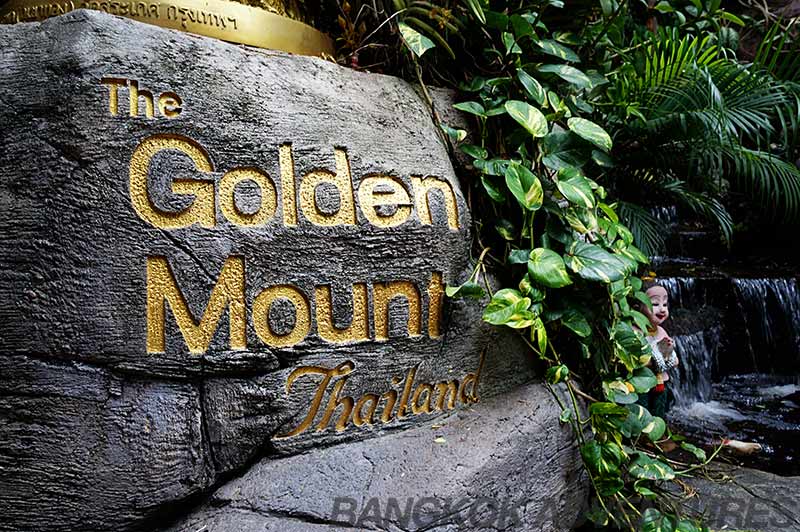 Reaching the temple is one of the best part of this experience as you walk up a winding path that circles the Golden Mount – waterfalls, statues, and botanical displays guide you up, and you pass several sets of giant bells to ring for good luck. The Temple of the Golden Mount is a calm oasis in the centre of the city; it’s within walking distance of the train station, but it feels a million miles away. 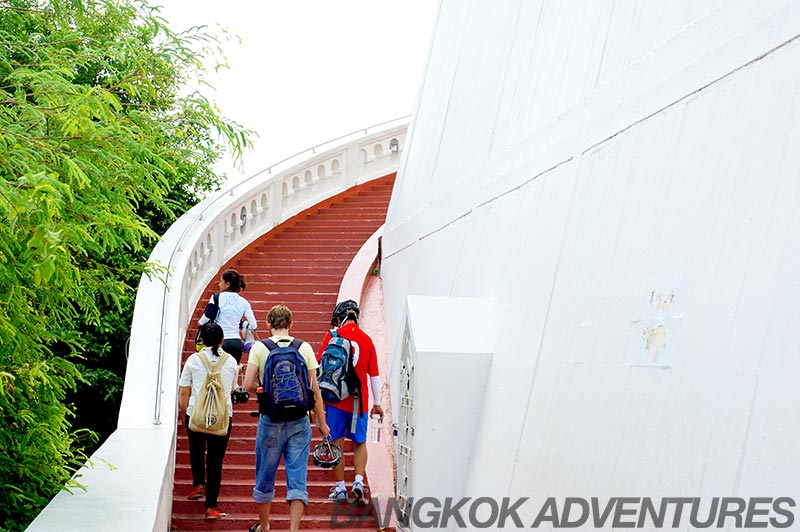 The mount was once one of the highest points in Bangkok – visible from all over the city. Although this title has now been claimed by one of the towering sky scrapers, none are close enough to obstruct the fantastic view. 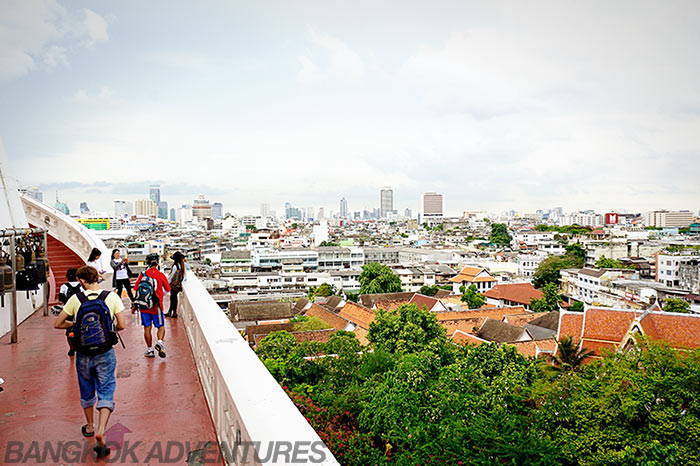 Once atop the Golden Mount, you will enter the surprisingly small temple – in here you can pray, offer some financial support to monks in training, take a look at some relics, and browse the small shop. What really keeps most people up here however, are the views. Sit and enjoy incredible views across Bangkok as far as the eye can see. The small balcony may induce sweaty palms but is a perfect vantage point for amazing photos with the city landscape as a backdrop. The relaxed atmosphere allows you to enjoy the area at your own leisure with no big crowds getting in the way of your photo. Despite the great views, the climb up is relatively easy, a mild incline and a total of 300 steps will take you to the temple, whose golden crown or ‘chedi’ can be seen from below, gleaming and glinting in the sunlight. 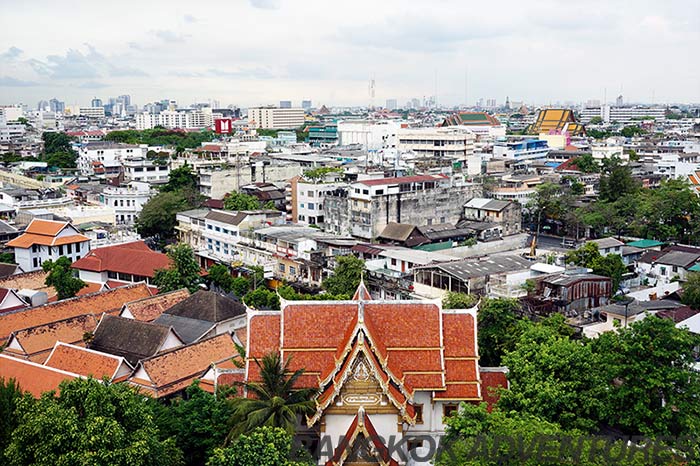 If you are visiting the Wat Saket to get away from the crowds then you may want to avoid the temple during Loy Krathong (usually in November) as there is a temple fair which attracts quite a crowd. During this period the temple transforms its golden chedi by draping it in luscious, bright red cloth and there are various food and game vendors to be found. This is also the busiest time of the year at Wat Saket and there are often long queues to ascend to the top, so be sure to go there as early as possible. 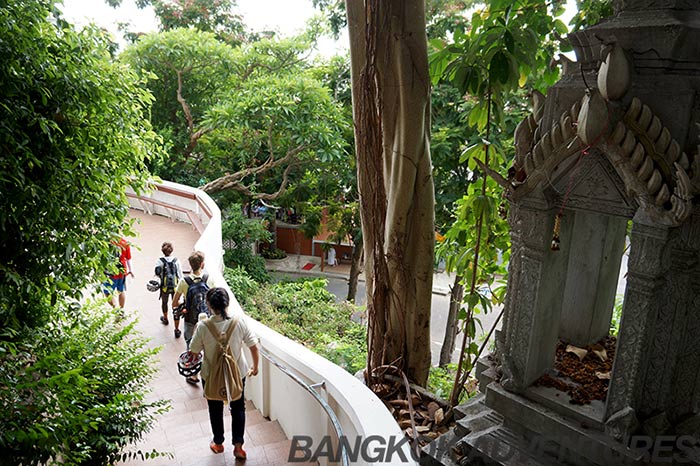 Wat Saket is known as the Temple of the Golden Mount, or as ‘Phu Khao Thong’ to Thai’s. We recommend going in the morning for an hour or two to beat the Bangkok afternoon heat. Be sure to take a bottle of water for the short climb, and grab an ice cream on the way to the top to enjoy while looking out at the city. The temple itself has no refreshments so don’t expect to stay for lunch!

The Temple of the Golden Mount is free to all visitors and is open from 9am to 5pm daily. To get to the Temple of the Golden Mount it is easiest to take a taxi or a tuk-tuk and ask them to take you directly to Wat Saket. If you prefer to walk or cycle then you may find it best to locate Wat Saket on Google Maps to plan out your route. Wat Saket is located between Boriphat Road and Lan Luang Road, off Ratchadamnoen Klang Road