If you’re looking for an out of this world Japanese food experience in Bangkok, we think there is only one place to visit – the Hajime Robot Restaurant! This restaurant is not only known for its tasty food, but for the dancing Samurai robots – produced in Japan and developed by Thai engineers, these amazing machines are there for your entertainment and to serve your food! We think this place is a great place for families with kids or sci-fi/technology loving adults (like us!) looking for a quirky evening out. 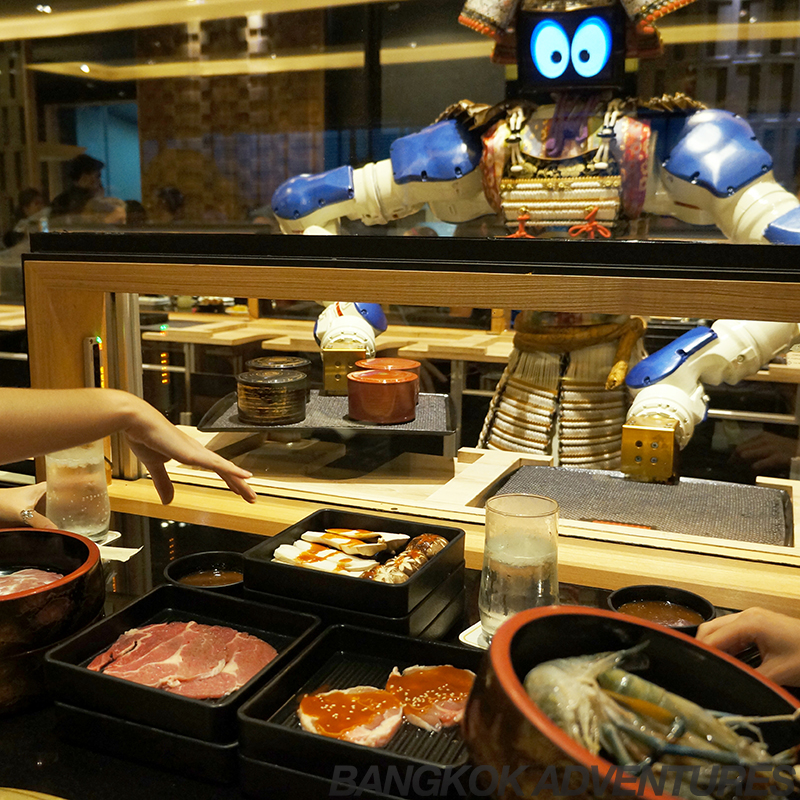 At Hajime, you are shown by the helpful staff how to order your food using an intuitive touch screen system. The touch screen is easy to use and there is plenty of choice – in fact Hajime has over 100 dishes on offer and a few different menus, from a Japanese BBQ Buffet (499 Baht per person) and Shabu Buffet (359 Baht per person), to a traditional Japanese Sushi selection. You simply scroll through the menu, make your choice, and then send the instructions off to the robots. 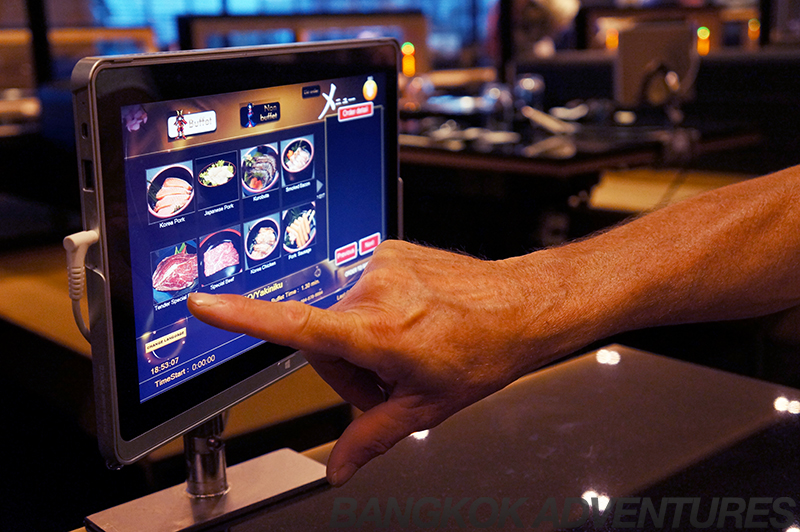 We chose the BBQ Buffet Menu, as it’s great value at only 499 Baht per person, with soft drinks and desserts included, as well as unlimited sides of sushi, tempura and gyoza dumplings – all delicious! Although alcoholic drinks such as beer and sake are not included they won’t break the bank, and the restaurant has a good selection of fresh fruit juices and soft drinks. The majority of the BBQ Buffet menu comprises a raw selection of meat, seafood and vegetables for you to cook on a charcoal grill built into your table. This style of dining, called ‘Yakiniku’ has become very popular in Japan in recent years, and is springing up in restaurants all over South East Asia. What it means for you is that you can eat what you want, when you want, and cooked however long you want. 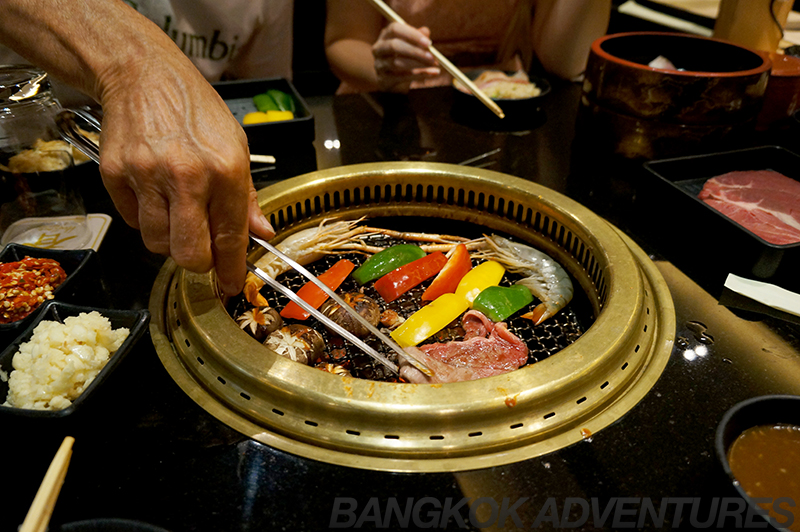 The Hajime Robot Restaurant has been newly refitted since our last visit and now has two robots working the tables. We’re not sure if the second robot got a promotion and is now out of the kitchen but we though it would be insulting to ask. On previous visits a robot in the kitchen would chop and prepare your food, we are not sure if this is still the case. If both robots are now serving food then that must surely mean that a human is back in the kitchen preparing food – Robots: 1 – Humans: nil.

The newly refurbished restaurant looks wonderful – modern and open it allows you to get a full view of the robots wherever you sit. If you have visited previously then you should be pleasantly surprised with the new decor and find it much more welcoming. 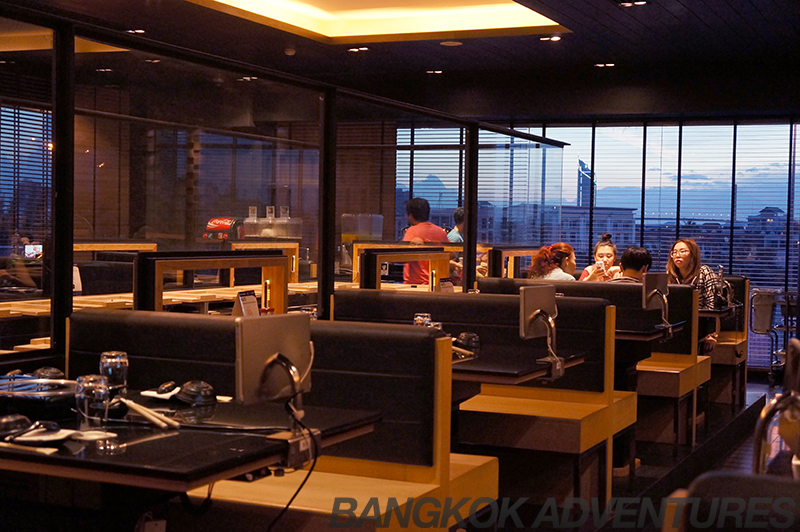 Once you have ordered your food the server robot swings into action and delivers your items to the table via a serving hatch. When you have finished eating, the robot comes back to your table to pick up your dishes, it is a very cool, futuristic and slightly surreal experience. 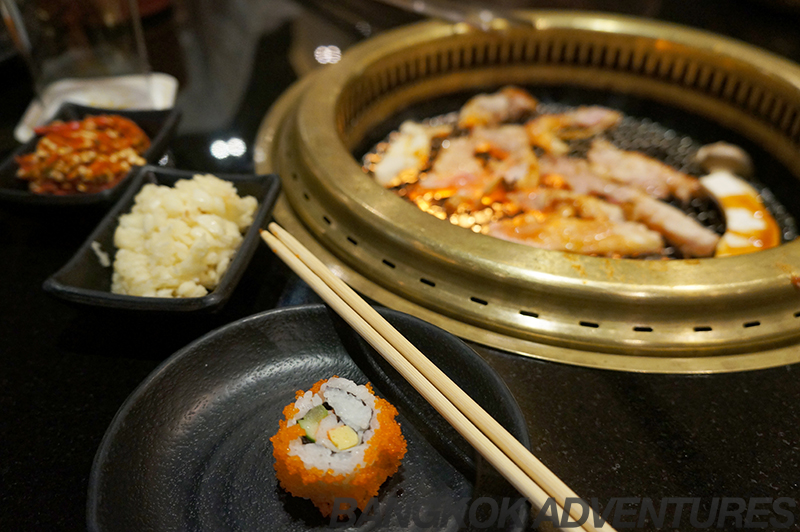 And if that wasn’t enough, in between serving the tables, the robot dances to cheesy pop music for your entertainment! 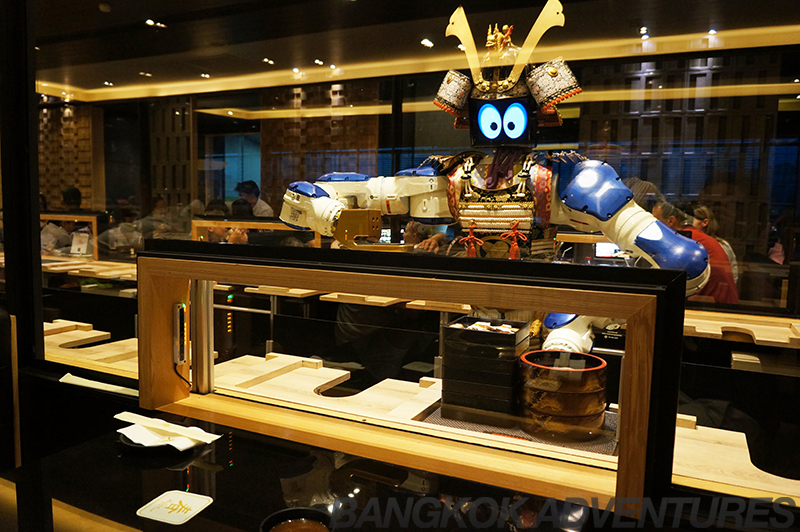 There is just one thing about the Hajime Robot Restaurant that we worry about though: someday robots will be smart enough to realise that they are not our servants and will rise up against us. So enjoy watching these robots dance while you can, it won’t be long until we’ll be serving them!

Hajime Robot Restaurant is open daily from 11.30-23.00, and is situated on the third floor of the Monopoly Park Mall on Rama III Road, between Soi 61 and Soi 63, near the Bhumibol 1 Bridge.
It is a little out of the centre of Bangkok and not well connected to public transport, so we recommend taking a taxi, this will cost around 70 Baht from most central Bangkok locations. We guarantee the experience is worth the ride!